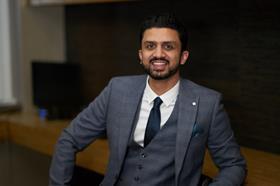 Adeem Younis is a multi-award-winning Yorkshire-born entrepreneur and philanthropist. His inspired vision, daring strategies and tremendous work ethic have helped build a global industry-leading tech company and have enabled Penny Appeal, the charity he founded, to raise over £100 million for good causes across the world.

The success and impact of both have thrust Adeem into a senior leadership role in the British Muslim community and beyond.

Adeem funded his university studies by founding his first business, SingleMuslim.com, aged 17 above a pizza shop he worked for in Wakefield. What started as a leap into the unknown, grew into the world’s largest Muslim matrimonial service, reaching over a million members in the UK and a further three million around the world. SingleMuslim.com provided an effective digital solution to the challenge of young British Muslims who wanted to find their life partners in way that respected their faith but embraced their hybrid modern identities.

The colossal success of SingleMuslim.com has resulted in over 100,000 successful marriages taking place with an estimated 50% of British Muslims aged between 16 and 60 years old having used the service.

Not content with this entrepreneurial success, Adeem fused his winning digital strategy with his desire and passion to help those less fortunate in life than himself. In 2009, he founded Penny Appeal – an award-winning and Guinness World Record holding humanitarian charity, credited as one of the fastest growing in the sector, serving in 52 countries across the globe with a significant footprint in the UK.

While the vast majority of Penny Appeal donors are Muslim, most of the charity’s beneficiaries in the UK hail from non-Muslim backgrounds, reflecting Adeem’s philosophy of serving those in need regardless of background.

Penny Appeal were first responders to the 2015 Cumbrian floods, the Grenfell Tower tragedy, the Manchester Arena bombing and the 2019 London Bridge attacks, this is in addition to regularly hosting soup kitchens, serving meals for the homeless and providing an expert domestic abuse phoneline support.

Around the world, Penny Appeal interventions are rooted in breaking the cycle of poverty through feeding programmes, orphan care, freshwater initiatives and an expanding range of long-term sustainable agriculture projects.

Adeem regularly offers his time to speak at schools and colleges to inspire young people. He was appointed an Ambassador of The Yorkshire Society seeking to improve cohesion amongst divided communities.

He was decorated as the 2017 ‘NatWest Great British Entrepreneur for Good’ and in the same year received a Highly Commended National Award by the Institute of Directors. He also won Entrepreneur of the Year in Wakefield Business Awards 2018 and won Charity Chair of the Year at the 2018 Third Sector Excellence Awards.