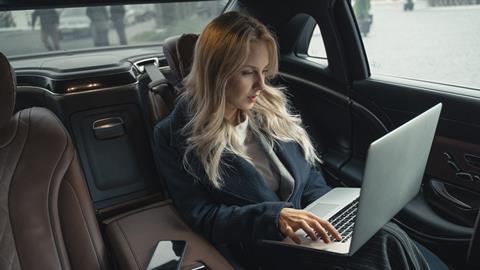 Did 2020 bridge the funding gender gap?

Both female-led and male-led businesses are now equally successful in securing bank financing. Does this mean 2020 may have set the wheels in motion to level the UK’s funding gender gap?

The relationship between female founders and their access to capital is complex. Data reveals that women business owners struggle to access debt and equity financing all over the world.

Venture funding to female-founded companies plunged by 27% in 2020 according to Crunchbase. However, newer data from an HM Treasury-led report reveals that both female-led and male-led businesses are now equally successful in securing bank financing. What does this reveal about the UK’s funding gender gap?

Why is there a funding gender gap?

UK companies attract more venture capital than businesses in any other European country. Yet only 1% of this funding goes to all-female founding teams.

This despite findings that startups founded and co-founded by women tend to perform better over time, generating 10% more in cumulative revenue over a five-year period – even after facing a massive funding gap.

Why is this happening almost universally across borders? And what are the biggest barriers for female entrepreneurs in getting access to funding to start and scale their businesses?

This is the subject of the Government-commissioned Rose Review, carried out by Alison Rose, CEO of NatWest. The funding gender gap is multilayered and directly impacts the whole of the UK economy, let alone the business owners in question.

Up to £250 billion of new value could be added to the UK economy if women started and scaled new businesses at the same rate as men.

Only 8.6% of all UK women surveyed in the Global Entrepreneur Monitor in 2017 said they plan to start a business in the next three years, compared to 14.3% of men. Once established, women are as successful as men in sustaining a business. 73% of men and women entrepreneurs in the Rose Review survey had run a business for 3.5 years or more. 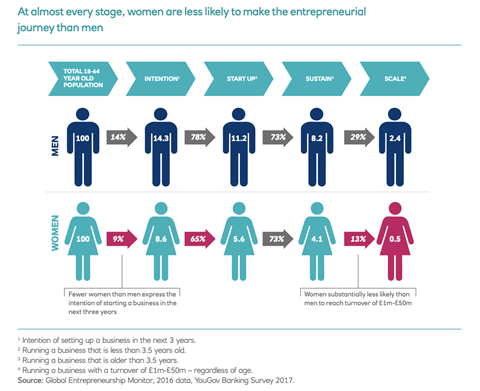 According to Alison Rose’s report, women are less likely to become entrepreneurs

One of the key reasons for this drop-off in entrepreneurial interest actually comes from the perception that securing funding is harder for women-led businesses. The Rose Review reveals a low access and awareness of business funding options as one of the top 3 concerns. 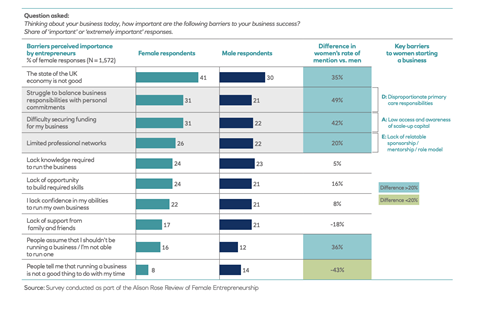 Rose Review: The main barriers for women to start a business in the UK

In 2017, Barclays and the Female Founders Forum published a report on the challenges faced by women entrepreneurs seeking funding. The research shows that men are 86% more likely to secure venture capital funding than women and are 56% more likely to win the backing of an angel investor.

So why does the funding gender gap exist and how can female entrepreneurs go about levelling the playing field and attracting the investment they need?

Lack of representation in finance

Business experts constantly warn against hiring in your own image. In other words, leaving our inherent cognitive biases unchecked can hinder any true progress we can make in being meritocratic.

The investment world is not exempt from this. Research shows that investors tend to back entrepreneurs who have similar backgrounds to their own, so if a female entrepreneur is pitching to a room of all-male VCs, she’s already facing an uphill battle. 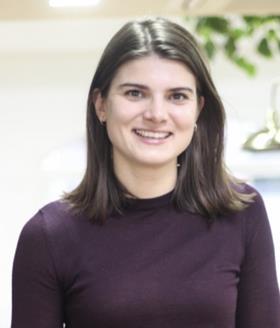 Alexia Arts is an Investment Manager at MMC Ventures.

“Given the large pool of capable candidates, the industry must widen its sourcing funnel and firms should address shortcomings in their evaluation processes,” MMC Venture’s Alexia Arts writes in a 2019 Beauhurst report on the topic.

A separate study reveals how the cards are stacked against female founders at a deeply unconscious level.

London Business School researchers reviewed Q&A interactions between 140 prominent venture capitalists (40% of them female) and 189 entrepreneurs (12% female) at an annual startup funding competition. The study then tracked all funding rounds for the startups that launched at the competition. These startups were all around the same level of quality and capital needs, yet male-led startups raised five times more funding than female-led ones.

The researchers analysed video transcriptions of the Q&A sessions with a linguistic software programme and manual coding. It revealed the disparity was due to an unconscious bias inherent in the venture capitalists on the panel.

More shockingly, this bias was present with both male and female VCs.

How can investors counter lending bias?

HM Treasury launched the Investing in Women Code in partnership with investors to better understand the barriers for female founders. It addresses any potential biases by holding the finance industry accountable for addressing the inequality by creating a benchmark to which they can compare themselves.

Normalising female success is the first step, and that can only happen when data is collected and analysed consistently. 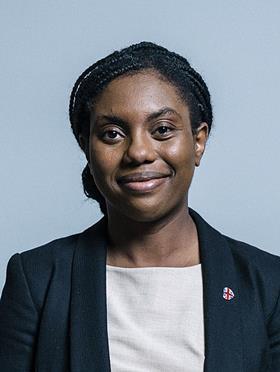 Kemi Badenoch is the Exchequer Secretary to HM Treasury.

According to the initiative’s first report published today, the act of pledging support to female founders itself is a crucial move in addressing these issues.

The data suggests that the 100 signatories of the Investing in Women Code are more likely to invest in female-run businesses than other investors, in line with their pledge to improve access to finance for women.“The Investing in Women Code has two broad aims – to drive the behaviour of signatories and to generate the data that is critical for us to understand, and begin to tackle, the challenges faced by female entrepreneurs,” the Exchequer Secretary, Kemi Badenoch explains. “This report helps us to build a broader and better-evidenced picture of the landscape of female entrepreneur financing.”

This landscape in question has never fully been mapped out. Data exists in clusters, and most paint a bleak outlook for women in business.

According to Beauhurst, 25% of UK high-growth companies have a female founder. This is because most of female founded businesses are also likely to be under 5 years old and many cease trading within their first 5 years.

On the plus side, this suggests that the UK may be looking at a strong pipeline of female-led growth companies once these early-stage companies gain a foothold.

Why are women entrepreneurs less likely to scale?

According to the Rose Review, UK women entrepreneurs are far less likely to scale up to over £1m in turnover than men. In fact, male entrepreneurs are more than twice as likely as women to successfully scale up their business to achieve £1-50m turnover.

Only 13% of women currently running businesses scale their businesses to this level compared to 29% of men.

The research suggests that this is because women tend to make different decisions along their startup journey so men are five times more likely than women to build a business of £1 million+ turnover.

Rose says it starts with building a pipeline of female entrepreneurs by exposing school-aged children to this career option and encouraging them to consider this as a career. 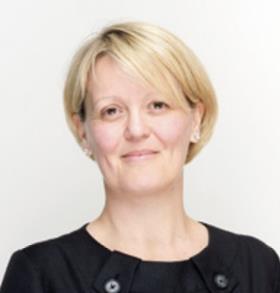 Alison Rose is the Deputy CEO of Natwest Holdings and CEO of Commercial and Private Banking.

”The next, and crucial, challenge is to inspire women to be ambitious for their businesses, and to support them to grow further, though only if this is a path they wish to take,” she says. ”Achieving a flexible work-life balance is an important factor for many female entrepreneurs, and the #1 reason for female entrepreneurs with children to start a business. The demands involved in scaling up a small business or running a larger business will not appeal to all.”

Turning your startup into a behemoth business isn’t necessarily the only route for success. “Ask yourself, do you want to scale? It is ok to run a highly profitable business which created beautiful products and services for people and gives you an abundant life with lots of freedom and flexibility. More than ok! So why the obsession with scale? It all feels a bit Silicon Valley… and not in a good way,” says Kathryn Parsons MBE, co-CEO of Decoded. ”However, do you want to ensure that you are harnessing the best technologies to create the best products and services for your customers and to make sure you are reaching as many customers are possible? Of course.”

It’s hard to definitively blame the funding gender gap on the Coronavirus since it’s been a long-standing sore point for women in business. However, there is tangible evidence that the pandemic has disproportionately impacted women in the workforce.

According to a 2020 McKinsey report, women’s jobs are 1.8 times more at risk than men’s jobs due to the pandemic.

Women make up 39% of global employment but account for 54% of overall job losses, primarily because of existing inequalities.

Women do an average of 75% of the world’s total unpaid-care work like childcare and domestic work. Additionally, women are disproportionately employed in sectors most affected by the fall out of pandemic lockdowns.

A separate study focusing on female entrepreneurs worldwide shows that 60.9% have experienced a significant decrease in sales or revenue in Q3 of 2020 and are not too optimistic about 2021 either. 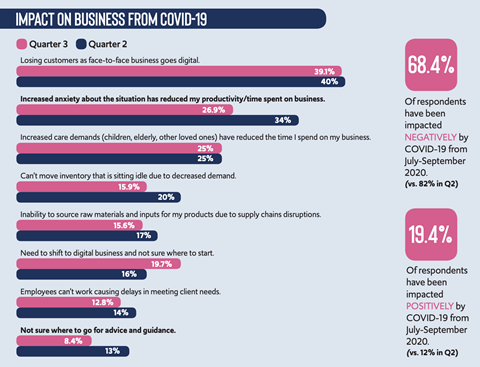 This suggests that at least some of these businesses may need a funding boost to get through the lean months to survive, let alone thrive.

Debt versus equity finance and the funding gender gap

According to the Investing in Women report, 15% of applications for bank loans were led by women and 56% by men (with the remainder from businesses with mixed leadership). This reflects the current demographic makeup of entrepreneurial Britain as 22% of businesses are female-led.

When it came to securing bank funding, 91% of female-led businesses were successful compared to 90% of male-run businesses.

While this sounds promising, it is not a true marker of funding equality. The gender gap still exists because undeniably, 91% of 22% is still a significantly smaller number overall. Additionally, the average loan amount approved for female-led businesses was around £25,000, while male-led businesses secured about £33,000.

Equity funding fared much worse. In venture capital, data from 40 signatories indicates that all-female teams account for only 10% of investment pitches that make it to the investor panel. Only 6% of teams that receive funding are all-female, and 26% of teams are mixed gender. Female-led businesses are also slightly less likely to receive follow on funding.

It’s not all doom and gloom. These figures are above the industry average for VC investors, where only 4% all-female teams and 19% mixed gender teams received funding in 2020. This is why early data suggests that the investors that are vocal about supporting women by signing up to Investing in Women Code are likely to be more active in redressing the gender imbalance. 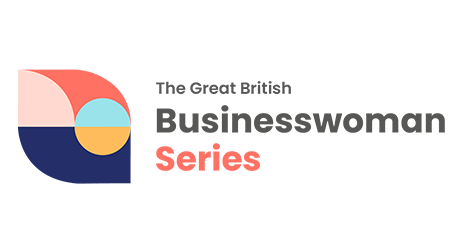