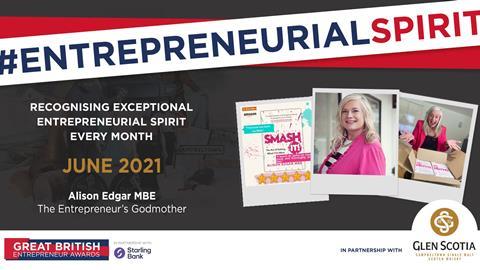 Each month we’re celebrating a member of the GBEA community who has shown incredible entrepreneurial spirit.

Alison recently launched her new book ‘SMASH IT: The Art of Getting What YOU Want’. Her latest release is all about how you can achieve your dreams, with implementable tips that are based on psychological research. Within the first two weeks of release, this was already an Amazon bestseller. This book is the follow-up to her authorial debut, ‘Secrets of Successful Sales’, which was an international hit.

Known to many as ‘The Entrepreneur’s Godmother’, Alison has been passing on her knowledge and tips for success for years, and her new novel is  the latest addition, aiming to promote entrepreneurship and make a real difference in people’s lives. A winner of the Special Merit Award at the Great British Entrepreneur Awards in 2014, she has now joined our illustrious panel of judges. She also speaks at events, bringing her business acumen to organisations all over the world, even teaching intrapreneurship in Kuwait.

What makes Alison’s story even more inspiring is that throughout her life, she suffered with undiagnosed dyslexia. Her writing career only started because she wanted to challenge herself to beat the condition.

Iain McAlister, distillery manager at Glen Scotia Single Malt Scotch Whisky, said: “Each month, we’re celebrating people who embody entrepreneurial spirit, and we can’t think of a better fit than the ‘godmother’ of entrepreneurs herself.

“Coming from a close-knit community, we at Glen Scotia know how important it is to support those around you, and to help each other to flourish. Our Campbeltown home has seen many ups and downs – from its whisky heyday with 30 distilleries now reduced to three, we are lucky to have local expertise in our field.

“It’s through learning from and working with others, we are where we are today – producer of the world’s best whisky, with our Glen Scotia 25 Year Old awarded the prestigious accolade – so we know how important Alison’s inspiring work to empower others is. I look forward to judging alongside her in this year’s awards.”

‘SMASH IT: The Art of Getting What YOU Want’ released on the 1st June 2021, and is available in ebook, audiobook, and as a paperback.