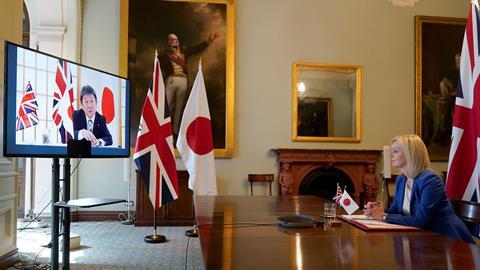 The hubs will be located in Belfast, Cardiff, Darlington and Edinburgh, designed to provide support and advice to local businesses in a bid to boost exports and economic growth outside of London.

Ms Truss said: “I’m determined to use UK trade policy to benefit every part of the UK. These trade and investment hubs will help this country to an export and jobs-led recovery.

“They will mean we can channel investment into all corners of the country, and that exporters – whether they’re selling Scotch beef, Welsh Lamb or cars made in the North of England – have access to the expertise they need to sell into the fastest growing markets.”

According to government figures, exports support 6.5 million jobs in the UK, 74% of which sit outside London. However, the latest data from the Office for National Statistics (ONS) show that exports to the European Union dropped more than 40% in January as the UK’s new relationship with the Union started.

There are concerns about the approach, among industry experts, however. Speaking to the BBC, Justin Urquhart-Stewart, co-founder of Seven Investment Management and Regionally, praised the efforts to build the economy outside of London, but suggested the government has got the hub locations wrong.

“The capitals of the three nations and Darlington are not necessarily where the industries are,” he said.

“You should have investment hubs in [places like Preston, Manchester, Leicester and Sunderland],” he said. “Darlington is a lovely place, but it doesn’t necessarily make the key export places they’d be requiring.

“You’re not exporting anything from there, so why are you giving the export advice?”