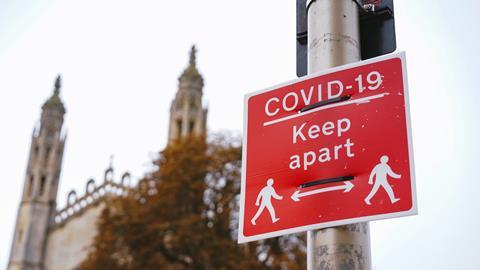 The high street vs Covid-19: Will more companies fall victim?

As Debenhams closes its doors, will we see more high street giants fall victim to the Coronavirus pandemic?

After more than 200 years of trading, Debenhams has now shut its remaining stores, bringing an end to what was once a high street giant. Andy Rudkin, partner and solicitor specialising in insolvency and restructuring at Nelsons, discusses how the coronavirus pandemic has impacted retailers and their supply chain, as well as the changes to insolvency rules that have been brought in to support businesses.

With the involuntary closure that was forced on many businesses by the UK-wide lockdown in 2020, previously successful companies quickly felt the strain, becoming more concerned about their future viability.

Many retailers simply did not have the income or cash reserves needed to pay their creditors during that time. However, this was not due to a failure of their business plan or a lack of demand, but because the economy was driven to a dramatic and unprecedented halt as a result of Covid-19.

Changes to insolvency laws to support businesses impacted by Covid-19

On 30 March 2020, the government announced proposed amendments to existing insolvency laws, setting out a number of measures designed to give businesses breathing space, so as to enable them to weather the storm. These proposals were made into a bill that was fast-tracked through parliament and brought into legislation on 26 June as the new Corporate Insolvency and Governance Act 2020.

The introduction of a company moratorium

This is a completely new procedure modelled on the USA’s chapter 11 bankruptcy process where directors of insolvent, or likely to become insolvent, companies can apply for a 20-business-day moratorium period. The moratorium provides businesses with a statutory breathing space from creditors within which they are able to formulate a rescue plan and work out turnaround options without incurring significant additional costs while an insolvency practitioner acts as the monitor of the company.

While a moratorium lasts for an initial period of 20 business days, there is the potential to extend it for a further period of 20 business days without consent and with the possibility of further extensions of up to one year with creditor consent – although the court has the ability to extend the moratorium for such period as it thinks fit, which could be for a period in excess of one year.

However, it’s worth noting that a moratorium is not intended to delay insolvency where it is inevitable and should only be brought into place where a rescue of the company is likely.

The introduction of a restructuring plan

Similar to a scheme of arrangement, which many companies already use to assist with the restructuring of debts, the new restructuring plan allows companies at risk of insolvency to propose a kind of compromise or arrangement between the company and its members and/or creditors.

If approval is obtained from the court (with or without changes), the proposal is sent to members and creditors, voted on and, provided that it is approved and delivers a better outcome than the next alternative (i.e. liquidation or administration), put back before the court.

The court then decides whether to sanction the vote or note. The court will take into account elements such as whether the classes have been properly formulated, whether each creditor receives more than they would under the next best alternative, and whether the plan is fair and equitable. It is important to note that a secured creditors rejection of the proposed restructuring plan can be overridden by the court in certain circumstances.

Under current insolvency laws, directors may be personally liable to contribute towards the assets of the company if they allow the company to continue to trade past the date upon which the director knew or ought to have known that the company could not avoid liquidation or administration.

The act directs the court to assume that the director is not responsible for any worsening of the financial position of the company or its creditors during the relevant period (from 1 March 2020). It has been made clear by the government that this is not a rebuttable presumption. It is important to note that this does not suspend any of the directors’ other duties. Directors are still subject to their usual statutory and fiduciary duties and it is important to remember that when a company gets into financial difficulties, the duties of the directors flip from looking after the interests of the shareholders, to looking after the interests of the creditors.”

The emergency methods that have been introduced to support companies are likely to have caused a reduction in insolvencies. And while in the short-term, these measures have provided protection for many businesses and people’s livelihoods, it is important to remember they are only temporary.

As they start to unwind, the number of insolvencies should be expected to increase – particularly in the sectors that have been severely hit and are on a far from stable financial footing, such as retail – as the true impact of the coronavirus pandemic come to be exposed. However, when that will be specifically remains unknown.