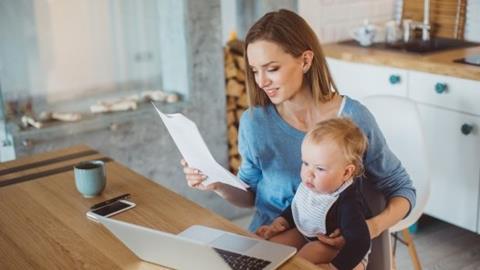 There are concerns that COVID-19 restrictions may have led to many households returning to traditional gender norms, according to new research by Vienna University of Economics and Business.

The researchers, led by Dr Katharina Mader, a researcher at the Institute for Heterodox Economics, asked participants about their working day and to report their use of time in intervals of 15 minutes – she then added up the hours of paid and unpaid work they did.

Dr Mader said: “For many, the limitation to 24 hours was challenging because the recent period has made it harder to separate home and work life. Feedback from respondents showed that their current days do not feel like they have 24 hours, but rather 36 to 42, which highlights the overload parents are currently experiencing.”

The research revealed that single mothers worked the longest hours, on average almost 15 hours a day, with nine of those spent on unpaid work such as childcare and household tasks.

The results for couples with children are similar: mothers work 14.5 hours, nine and a half of those are unpaid, whereas fathers reported 13.75 hours of work, with seven of those being unpaid.

One in three women with a university degree and one in four women without a degree stated that during the lockdown, and compared to their partner, they were doing a larger share of unpaid work than before the COVID-19 crisis.

Dr Mader added: “Regarding the division of childcare tasks our study reveals a clear backlash to more traditional gender roles. Seventy per cent of females answered that they are doing the largest share of childcare, and they also reported feeling like they are doing most of this work alone – highlighting the associated psychological stress that women, especially mothers, have to bear.”

Surveys have shown that women fear professional disadvantages far more frequently than men when they work from home, regardless of their career levels.

The researchers state that it is precisely because of these role models that women are rarely offered the option to work from home, because it is assumed that looking after children and household will prevent them from concentrating on their work. It is of great importance to make unpaid work more visible, especially when we must raise the questions of how parents and in particular mothers, are able to cope with a second lockdown and/or school closures.