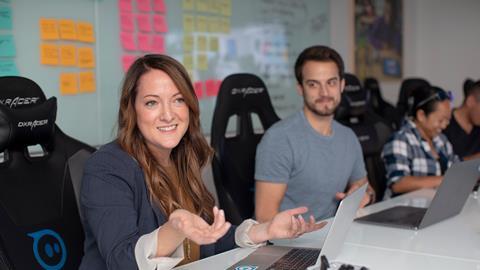 If you can’t change the game, CHANGE the game

While women in financial services are expect to maintain high work standards, male mediocrity still has a place in the sun in the London square mile. Why? New research suggests it’s because office politics is a “white man’s game”.

Office politics goes beyond backstabbing and mindgames. The positive side to politicking incudes being able to negotiate, influence, and persuade others to get what you want. That would suggest office politics can be used as a forced for positive change, if weilded well.

New research, however, suggests a gender disparity when it comes to office politics. While the age old ‘catty women’ stereotype may suggest less collaboration and more power plays among women, it turns out office politics is a “white man’s game”.

Researchers Pamela Perrewé and Debra Nelson found that women undervalue office politics for career advancement in favour of getting the task done well. According to the researchers, mentoring and training women may help them learn how to play the game…and play to win.

A new report from LSE and Women in Banking and Finance (WIBF) reveals that this performance over politics mindset may explain sustained gender disparities.

The research zeroed in on London’s financial services sector and revealed that women are expected to perform consistently well while male mediocrity is left unchecked.

Researchers found a number of reasons for this disparity, include social norms, retention bias and a difficulty among women, especially black women, to gain recognition on their performance at work. Furthermore, the report identified a tendency for managers to fake empathy when managing women, recognising that the trait was now seen as valuable.

A performance over politics mindset

Women in financial services are in a sink-or-swim position according to the report. Conversely, men have many more opportunities to survive. Women in the sector have less leeway to make mistakes than men and are either celebrated or ridiculed depending on performance.

So if the sector is just so competitive that women are put under a microscope, why are men with below-average performance still in the picture?

The report suggests it is because they play ‘good politics’. This also means that these men incorporate politicking into their management style, seeing it as a crucial trait when hiring and promoting people. This puts emerging talent who don’t play office politics at a disadvantage.

“Having the opportunities of talented women guarded by managers that favour people ‘like them’ and play bad politics is detrimental for financial services in terms of innovation,” study lead Dr Grace Lordan, director of The Inclusion Initiative at the London School of Economics and Political Science, says.

This implies that women and people from ethnic minorities need to change their behaviours to match those more palatable to the corporate world. The frameworks of what makes a successful employee or leader were wrought in iron decades ago based on the very white male prototype of the past. Is expecting women and minorities to adapt the an old framework really going to move the needle?

Counter the cringe: Self-promotion is good

Separate research shows that it wouldn’t even matter if more women and minorities tried to do what their white male peers would. Women described office politics as an informal system that keeps power with those who have it, while excluding those who don’t, making it very difficult for women and minorities to gain the same positive outcome.

For example, office politics also includes ‘tooting your own trumpet’ where you actively share your work successes with managment and peers. Stereotypes often box women in, expecting them to be self-effacing and humble, crediting the wider team and collaboration. For women who do shout about their successes, the backlash may include social exclusion.

A LinkedIn study showed women are far less likely to share their successes than men. Their profiles are shorter, and “even when they had similar jobs and skill levels, women would still include 11% less of their skills than men on their profiles.”

Why? Because it’s ’unladylike’. Shaking those antiquated concepts may take longer than we’d like.

Women don’t need to change to fit in, but we can’t what we’re fitting into unless we celebrate how far we’ve come. And self-promotion doesn’t need to be cringey. Applying for industry specific awards is a way to start.

We partnered with the Great British Businesswoman Awards to give women that unbiased platform to be appreciated for the work they’re doing and can fly their own flag high without concerns of being braggy or even not knowing where to start.

Back in 2015, the financial papers were calling out the FTSE 100 for its lack of female representation. More men named John ran FTSE 100 than women. The same phenomenon today is nicknamed the Peter Problem: there are more CEOs named Peter leading top UK companies than female CEOs. While not discounting the merits and hard work put in by the Peters and Johns of the business world, expecting women and minorities to ask themselves ‘what would Peter do’ may not add to the inclusion discussion at all.

American entrepreneur Vivian Kaye shot to heights of TikTok fame when she explained the ethos helping her grow her business; asking herself every day at every turn, ‘What Would Chad Do?’.

Her tongue-in-cheek TikToks poke holes at the double standard. ’If you’re a woman, especially a woman of colour, you need to have the audacity of a mediocre white dude named Chad,” she quips. “Chad is the guy doing all the things he has no business doing, but he does it anyway because he has the audacity.”

What Would Chad Do?™ pic.twitter.com/MvTIAxsnPi

The response to her viral videos have been so positive that Vivian trademarked the phrase and started running seminars on how to be more Chad.

But if we all try to be more Chad, where’s true diversity of thought and action? Where’s real authentic representation? To tackle this challenge, WIBF and LSE have created the GOOD FINANCE framework to help bring inclusivity to financial services firms. 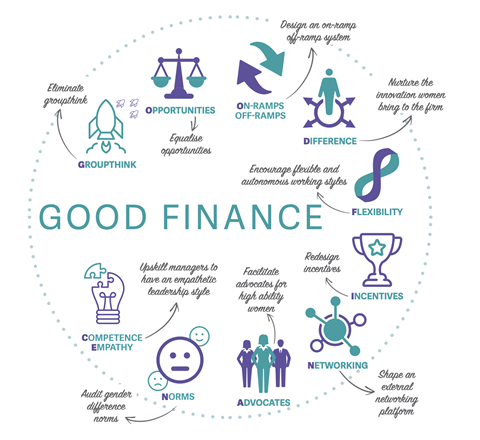 The framework takes into account qualitative research involving 79 women who participated in a recent study and attended roundtables, alongside the 1,703 respondents who responded to a survey conducted by The Wisdom Council.

Instead of creating mentoring programmes for women and minorities where politicking traits are encouraged, perhaps the solution is to create environments that support diversity in behaviour.

”The final gender convergence will only come when financial services have managers across all levels of seniority who embrace an inclusive leadership style that ensures the voices of all talent are heard because they are certain it is better for their own objectives,” LSE’s Dr Lordan adds. ”Until this point, we are stuck in a compliance phase where we need to continue monitoring and auditing the progress of women in the sector to ensure progress actually happens.”

Research has found women who engage in office politics often consider it emotionally draining, and anecdotal evidence suggests that women may even reject leadership roles because of their dislike of office politics. Future research needs to investigate whether this holds true for minority groups as well as white men, as we may find that office politics is really an outdated game that no one wants to play. Instead of asking what would Chad do, it may be time to ask why do what Chad does?

Here’s the deal: you’ve worked hard and earned your success, even if the little voice in your head asks if you know what you’re doing. You have the credentials, qualifications and experience so why not indulge in self-promotion?

Sharing your story with the world may inspire others to do the same. You can start with the Great British Businesswoman Awards, which is open to women and allies across a diverse range of industries. The awards programme is in its first year and already has a top tier judging panel of inspirational people advocating inclusion at every level.

Just fill out a brief nomination form by the new deadline (6 August 2021) and see where it takes you. Click here to get started.

How to pitch to investors: Female Founders in Focus