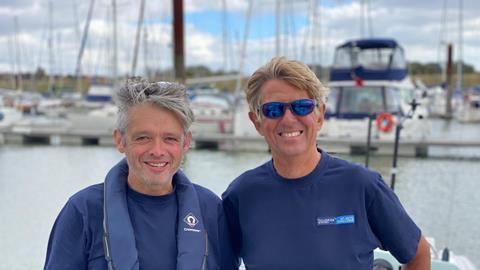 Long-time partner and friend of Fresh Business Thinking, Guy Rigby, is taking on the Talisker Whisky Atlantic Challenge – a 3,000 mile rowing challenge – in a bid to raise £1 million for the social entrepreneurship charity UnLtd.

Guy, who will be 68 by the time the challenge begins, and his rowing partner David Murray are attempting to become the oldest pairing to row the Atlantic with a combined age of 124. They set off in their boat, The Entrepreneur Ship, in December 2021 rowing from the Canary Islands to Antigua in roughly three months later.

Guy says: “Having spent most of my life working with and advising entrepreneurs, it’s clear that there’s a huge opportunity for businesses to focus on people and planet, as well as profit, to be at the centre of the business agenda.

“This so-called ‘triple bottom line’ is what led to my interest in social entrepreneurship – and I’m delighted to be fundraising for UnLtd, who support hundreds of these impactful businesses every year.”

With nine months before the challenge even begins, Guy and David have already raised more than £100,000 through a combination of donations and sponsorship and hope to raise a further £900,000 for UnLtd.

UnLtd funds and supports social entrepreneurs – enterprising people with solutions that change our society for the better. It was launched in 2002 by seven organisations who believed that social entrepreneurs had a much bigger contribution to make to our economy and society. It was among the first organisations to back individuals with their own ideas to create social good.

You can follow updates on Guy and David’s training, learn more about the challenge, and get involved through sponsorship on The Entrepreneur Ship website.

You can also help Guy and David reach their £1 million target by donating here.