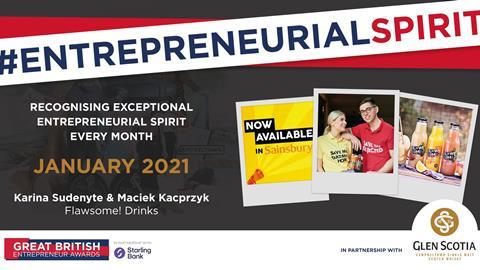 Raising a glass to entrepreneurial spirit

Every month, the Awards will be celebrating a member of the GBEA community who has shown incredible entrepreneurial spirit. And, as a reward, Glen Scotia Single Malt Whisky will be sending bottles of its classic Double Cask and 15 Year Old single malt Scotch whiskies.

Earlier this month, the husband and wife duo announced that they had secured a listing to sell Flawsome!’s Sweet & Sour and Apple & Orange juices in 124 Sainsbury’s stores across the UK.

Flawsome! saves imperfect and surplus fruit and transforms it into perfectly crafted cold-pressed juices. Karina and Maciek were the national winners of the Young Entrepreneur of the Year category in 2017 and have been a fantastic part of the community ever since.

Iain McAlister, distillery manager at Glen Scotia Single Malt Scotch Whisky, said: “Karina and Maciek have found perfection in the imperfect by turning ‘wonky’ and surplus fruit into a range of drinks. Their recent success is testament to the hard work and dedication, not to mention entrepreneurial flair, that they’ve shown.

“Using recipes honed through generations whilst adapting to modern times is something we have common.”