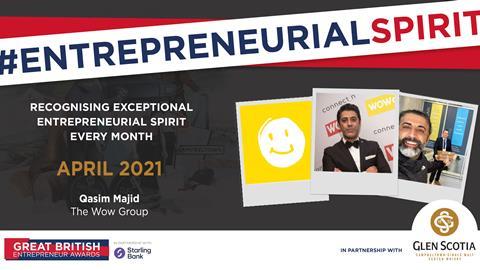 April’s winner is Qasim Majid, founder of The Wow Group!

Qasim launched Wowdot CIC and the #CONNECT_IN campaign in January in response to the news that large numbers of school children didn’t have access to laptops or internet connection and were therefore unable to complete schoolwork at home while the UK remained in lockdown.

Official estimates suggested that up to 5,000 children in Birmingham alone were affected by this issue, but  Wow Group’s own subsequent research found the figure to be in the much bigger region of 15,000.

#CONNECT_IN encourages people to donate their unused laptops but also raises money to provide internet access along with its partners to thousands of families across Birmingham.

Wowdot delivered its 200th laptop in April and is well on its way to reaching its target of connecting 1,000 children over 12 months.

Iain McAlister, distillery manager at Glen Scotia Single Malt Scotch Whisky, said: “Coming from a small community, we know the huge impact that a gesture like Qasim’s can have. At Glen Scotia, we like to give back, whether it’s donating our draff – a by-product of the whisky making process – to feed farm animals, or casks to raise funds for local clubs and businesses.

“Qasim took initiative at a time when his local community needed him, and the impact is incredible, with 1,000 children set to benefit from his work to provide the much-needed resources that will help them to keep on top of their schoolwork, and in touch with school friends.”