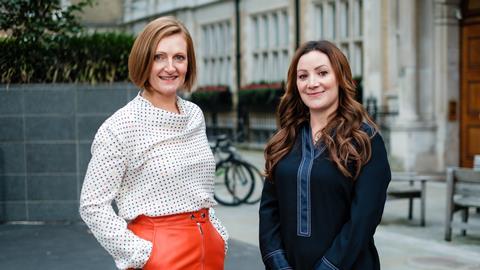 A “refreshingly modern” approach to law

When you think of industries that have been brought into the modern age in recent years, it’s fair to say that few would suggest law.

It has a long-lasting image of old, white corporate men in stuffy, dated offices working to practices born decades ago.

And yet, there is a new type of law firm. One that is trying to drag the industry out of the 20th century and into the modern world of business. One that prides itself on its “refreshingly modern” approach. And that law firm is Allard Bailey.

As a boutique law practice, Allard Bailey specialises in all areas of family law , as well as the preservation of private wealth, with a niche helping entrepreneurs and professionals whose family finances and children law issues are more complicated because of their working life.

Both as a partnership and as individuals, Louise Allard and Sabrina Bailey have walked a long road to get to where they are today.

Growing up in Edinburgh, Louise admits she had a “relatively normal” upbringing, but her father was a barrister and ran his own business, providing the ideal inspiration for her later path. But law wasn’t in Louise’s immediate plans. She’d always taken an interest in politics and debating.

“I studied politics at Sheffield,” Louise starts. “After graduating I moved down to London and spent a long time not really being sure of what I wanted to do.

“I was constantly asking myself ‘what is the next step?’. So I spent my 20s exploring a lot of different things.”

She spent a season managing a ski chalet in France, learning how to operate a business on a day-to-day basis, before moving to New York for a year and working in a restaurant. Returning to the UK, Louise got a job as a project manager with a new media agency at the height of the ‘dotcom boom’.

“Like a lot of new media agencies at the time, it eventually went bust,” she recalls. “By this time, I was in my mid twenties and made the decision to qualify as a solicitor. I’d grown up surrounded by law, watching legal dramas like LA Law and it was what I really wanted to do.”

Whereas Louise gained a great deal of inspiration from her father, Sabrina had a much more traditional expectation of a career path set out for her.

“No one in my family has ever run a business,” she says. “My late father was an accountant and my mother worked part-time as a teacher.

“They were very much of the mindset that you work hard at school, get a job, get a salary, everyone has a boss, you work, you retire, get your pension and that’s it.”

From an early age, however, it was clear that Sabrina was destined to deviate from that path, at some point at least.

She explains: “I’ve always felt that I’ve had something entrepreneurial in me, even as a child. When I was nine, I set up a little car cleaning business and got regular customers from that. I did what I could. I’ve always enjoyed getting out there and trying to make my own money.”

Law was her real passion, though, and Sabrina studied law before joining her first firm as a trainee solicitor.

The pair met in the early days of their first jobs as solicitors and worked well together for several years. Interestingly, it was maternity leave for both Louise and Sabrina that ignited the spark that would lead them to Allard Bailey.

“Having children was definitely the catalyst for me,” Sabrina says. “My eldest son is 14 now and I couldn’t help but think I could be doing something different, I could be in control of what I’m doing and when I work, and I could have that flexibility I needed as a mum.”

Five years after joining as a trainee and shortly after returning from maternity leave, Sabrina left her job (and law entirely) to launch her own business in the retail and manufacturing sector. She grew the business over several years and successfully exited in 2014.

“It’s still going really strong. And it’s really nice to see, even though I’m not involved in it anymore.

“Although it was a totally different industry, it gave me such an amazing grounding for setting up Allard Bailey. Louise hadn’t had her own business before, so it was great to have one of us who already knew what we needed to do to get things off the ground.”

By 2014, both had had three children and were looking for a return to work.

“Our old boss heard I was coming back to London and offered me a position,” Sabrina says. “And she knew Louise wanted to start practicing again, so offered her a job.

“I don’t know, maybe it was serendipity. We both got offered jobs at the same law firm, at the same time, and they even put us in the same office together.”

Louise recalls the early days working together again: “We were sitting beside each other and just realised that we really didn’t have the flexibility that we needed to balance our work and family commitments in a way that was productive for everyone.

“I can remember for Sabrina it was particularly frustrating as she’d created a very different environment in her own company and this really highlighted how out of date legal working practices were.”

Whereas most employees’ frustrations would manifest themselves in a whinge or a vent, Louise and Sabrina channelled their frustrations into conversations (privately, of course) about their ideal culture and the practices and policies they’d put in place if they were ever to start their own business.

“I think it started off as a little joke,” Sabrina laughs. “If there was something we didn’t agree with within the firm, one of us would whisper to the other ‘that wouldn’t happen at Allard Bailey’.”

Louise adds: “We talked about it more and more and realised that we had very, very similar ideas about the type of business we would build so that we could better meet both our clients’ needs and those of our team.”

“I’d never really thought about setting up on my own,” Louise admits. “But I think Sabrina had that business confidence having gone through it before.”

Sabrina was certainly the driving force in starting the process. She says: “I just reached a point where I knew there was a better way of working for myself and my clients, and I said to Louise one day ‘I’m going to hand my notice in, you’re welcome to join me, but if not, I’m still going.

A brief time spent thinking about it ended with three words from Louise: “Let’s do it.”

Louise and Sabrina spent four months working on the business behind the scenes at cafes during their lunch breaks, securing funding and authorisation from The Law Society. They started planning in August 2016 and quit their jobs in December, taking their first official day on 2 January 2017.

“Refreshingly modern” is a phrase that is easy to shout about in an industry that has such an outdated image. So what does it mean in practice?

“We have a very nimble way of working and put systems in place so that solicitors don’t need to be in an office to do their job. We’re very much of the philosophy that we’re all grown up, as long as your clients are happy - work when you want to work.”

Sabrina adds: “We all know the horror stories from City lawyers having to work until 10pm and still being expected to be at their desks by 9am. We’re the complete opposite. We’ve been flexible from the start and we want our team to have total flexibility and feel completely supported by us. It’s a more natural way of working that allows everyone to work to their own rhythm and helps them produce the best results for clients.”

Most traditional law firms have solicitors operating on billing targets, which is something Allard Bailey doesn’t do. And many of us will be familiar with our lawyers billing huge amounts to send a single, quick email - but that’s also something Allard Bailey has sought to address, prioritising value for money for their clients.

“We are not the cheapest option,” Louise admits. But she stresses: “We’re a central London firm of solicitors with City experience and we keep client costs down wherever possible without compromising service so what I can say with certainty is that we’re really good value for money.

“And that has helped us to attract a really high calibre of solicitor and grow the business in a way that is based around happier clients and referrals.”

Despite being the new kids on the block in a very traditional industry, Allard Bailey has continued to outperform its own expectations in its first five years of business. And that success was recognised in 2020 when the business was awarded a place on the Legal 500 list of the best family law firms in the UK.

Almost unheard of to be included so early in the business journey, Louise says it gave her and Sabrina “the confidence in what we’re doing - that we’re not just peddling our own story, other people are recognising that our approach works”.