Last night we saw the England Lionesses take away England’s first major trophy since 1966. And the team has since been awarded the Freedom of the City of London for their heroics in the European final - and as well as their amazing win, they have put a smile on the faces of many people today as they make history. 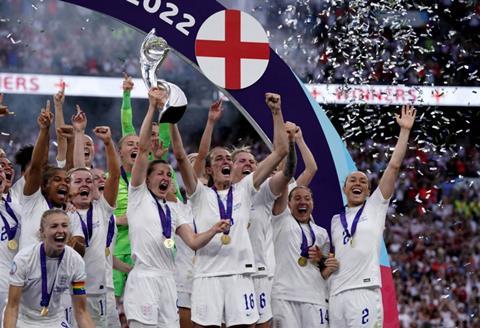 Sunday’s final against Germany took place at Wembley Stadium - which they completely sold out with almost 90,000 seats filled - and that’s not to count the people watching it from the pubs and sofas. The match was the biggest attendance ever for a men’s or women’s Euro final.

And all this success and joy has come from a sport that the English Football Association effectively banned in 1921, because – shockingly - the FA worried the growing popularity of women’s games was threatening to attract too large a crowd.

Thankfully, we’ve come a long way since then, and now around the world, women are matching their male counterparts for passion, drive, visibility and clearly winnings. So, if there’s a difference between women’s and men’s football, it isn’t down to technique.

The 2022 Euros have shown that women are more than capable at smashing the sport, and it’s a true inspiration to see women showing the next generation that women are capable of all of the same things as their male counterparts.

Discussing the win, Alex Scott, BBC TV Presenter and former football player said: “It is hard for me not to get emotional right now, because the amount of investment which has gone into the women’s game is for a moment like this. For this team to get to Wembley, they are creating something special and deserve every accolade which is coming their way.”

“Everyone who has been involved in women’s football has been waiting for this moment. It’s special.”

This is one huge step for women in sport and women all around the world.

Are you a woman in sport inspiring the next generation of women? Enter our Great British Businesswoman Awards here - where we help champion the inspiring women of today.