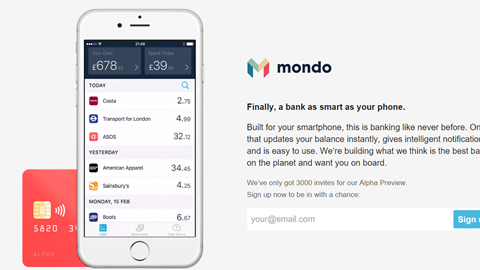 Mondo, a new bank that only operates via an app, has raised £1 million through crowdfunding in just 96 seconds, setting a new record.

Crowdcube co-founder Luke Lang tweeted to say it was the “fastest equity raise ever! Not just on Crowdcube”.

Mondo initially planned to launch its fundraising campaign on Monday, but received so much demand that it crashed Crowdcube’s website. The new bank said it received interest from 44,000 people.

Tom Blomfield, CEO of Mondo, said: “We’re the first bank to enable customers to become shareholders through a crowdfunding platform. Our customers are already helping us to build the bank from the ground up by alpha testing the mobile app. They deserve to be a real part of our journey to be a bank that people can trust and puts them back in control of their finances. We want to continue to involve them in future funding rounds.”

Mondo is the UK’s first app-only bank. It allows customers to see real-time updates to their bank account, giving intelligent notifications and allowing customer to make better decisions. Mondo also collates transactions to tell customers how much they spend at a certain store, and whether or not they are spending more than average in a month.