Tickr’s ethos centers on giving people who’ve never invested in anything before the opportunity to back businesses that are committed to a better collective future. Here’s how Tom McGillycuddy and Matt Latham got started. 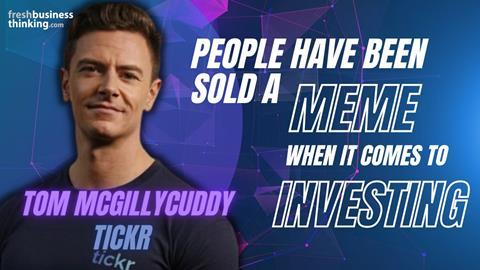 On the Rise is an interview series presented by Fresh Business Thinking to showcase exciting entrepreneurs whom we predict to be the next generation of ‘household names’. In this episode, we speak to Tom McGillycuddy, founder of tickr, a revolutionary impact investment platform.

It should be easy to back the businesses that can protect the planet while you pocket profits. Yet data from the 2021 UK Responsible Investing Study shows that a lack of understanding about impact investing is harming the take-up of impact-related funds.

The concept of impact investing isn’t new, but it took Tom McGillycuddy’s business, tickr, to make socially responsible investing simple and accessible. Tickr allows individuals to invest as much or as little as they want within portfolios that fall within tickr’s main impact investment themes.

With the Gamestop investment craze making headlines in the US in early 2021, amateur investors may be ready to take on larger portfolios. Tom warns that people need all the facts before backing businesses, however. “People have been sold a meme of what they think investing is,” he tells Fresh Business Thinking’s Arran Wilson.

At the beginning of 2021, you could have bought a share in videogame company GameStop on the New York Stock Exchange for less than $18. By the end of January, you could have sold them for as much as $483 at a profit of more than 2,580% in a matter of weeks. Armchair investors and seasoned professionals had to sit up and take notice, and speculate whether this may have changed the landscape of investing.

Off the back of the Gamestop story, Tom says that tickr did receive a lot more attention, but the downside is that people may have false expectations. “You aren’t going to get that itch scratched on tickr,” says Tom. “We’re a steady wealth-building platform that focuses on long-term steady growth with positive impact in our DNA. We’re not for people trying to make a quick buck.

”We benefitted (from the Gamestop craze), but the industry now, including us, needs to do good job of teaching people what actual investing is. It’s not gambling. There are apps where you can do that. You may as well go bet on a horse that’s running instead. We’re an antidote to apps like that, and it’ll show with time.”

Tickr’s ethos centers on giving people who’ve never invested in anything before the opportunity to back businesses that are committed to a better collective future. ”We want to bring people to the table who’ve never invested in before, which helps tackle the financial inclusion issue and the impact investment issue we’re passionate about. They fit together so perfectly,” he adds.

Getting amateur investors to invest in ’proper businesses in the way it’s done by professionals like Warren Buffett’ changes the game.

When Tom and his co-founder Matt Latham started tickr they were in a position where they didn’t have any liabilities or debt, and were saving up to buy themselves out of the industry with which they were quickly becoming jaded. ”If I don’t do it now, who could? It was more of a risk for us to not do it and someone else doing it. In ten years’ time we didn’t want to look back on this with regret. It became such an easy decision in the end,” he says.

Tickr’s portfolio sweet spot is large, established impact businesses that need a funding boost to further their goals. “We have data sets that analyse where a company’s revenue comes from. In an ideal world, we want to find companies where 100% of their revenue comes from a pure source. Of 10,000 businesses that are listed on the stock market, only 600-700 would qualify for impact investment.”

“It might sound morbid, but when I’m on my death bed, I want to know I did something that mattered.”

Finding these businesses may not be easy for tickr, but the process takes a lot of the onus of ethical due diligence off investors. “Loads of companies say they’re doing good, but are they? For example, Coca Cola does a lot for sustainability, but they produce fizzy drinks that rot your teeth,” he explains. A lot of the vetting process is data driven, which is what makes the model scalable.

In February this year, the startup secured £2.5 million in funding lead by Ada Ventures, a VC with an impact focus. Tom says this funding will help tickr accelerate product development, expand its user database and reach into the European market. Interestingly, he says the timing wasn’t right, despite securing investment. “When the pandemic hit, we were looking for funding and that market had dried up for about six months,” Tom adds. “We had to come back on the scene and get it done, but it was helped by the business performing well in those months. Overall (the pandemic) has benefited us and we’re very fortunate to be able to say that.”

Watch the full interview above, and check out our YouTube channel for more.