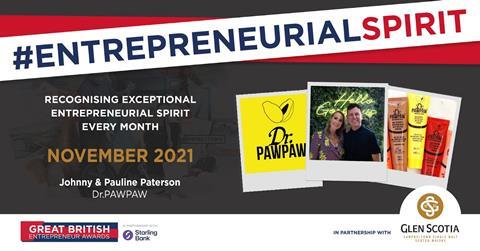 Already the UK’s No.1 pawpaw balm brand, earlier this month Dr.PAWPAW announced the next step in its impressive international expansion. The brand already has a footing in the Netherlands, but announced a listing with two key retailers in the country. One deal will see its Original and Peach Pink 10ml balms and its award-winning, vegan innovation Scrub & Nourish stocked in over 500 Etos stores nationwide. It will also launch into 1,300 A.S. Watson stores in the Netherlands.

Dr.PAWPAW is also launching into a new market - South Africa - with The Foschini Group stores, where all of its tinted and clear 25ml and 10ml balms, haircare, hand creams and gift sets will be stocked.

The brand sells globally in over 30 countries with a cult following including beauty experts, celebrities, families, influencers and make-up artists.

Johnny was crowned Great British Entrepreneur of the Year in 2020, having won the same title for London & East of England earlier in the year.

Iain McAlister, distillery manager at Glen Scotia Single Malt Scotch Whisky, said: “It’s a real joy to take a locally-loved brand and share it with the world. It’s wonderful to see that quality is recognised and appreciated not only close to home, but around the globe. Congratulations to Johnny and Pauline Paterson on a very well-deserved award win.”