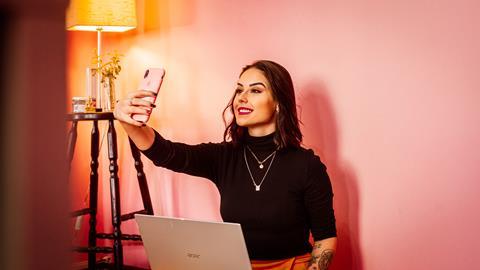 As consumers clamour for authentic content, the ‘Everyday Influencer’ reigns supreme. What does this means for businesses relying on influencer marketing?

Over 9,000 consumers across the UK, US, Canada, Germany, France and Australia, reveal a challenge for brands in a new survey, as they indicate that everyday social media users have become the go-to accounts to follow, compared to celebrities or social media stars.

According to a study from Bazaarvoice, specialist in product reviews and user-generated content, the role of the influencer is evolving to meet consumer demands as people unabashedly scroll past conent that’s not authentic, genuine, or transparent.

While normal consumers may not consider themselves influencers, they certainly are - everyone is. And the everyday social media user has become the preferred influencer to follow for over half of consumers, according to this research. Whether it’s friends, family, peers, or wider networks, those that share day-to-day content, products, and places that they find a genuine interest in, without an agenda to promote, are now the most trusted source for authentic and genuine content for two in five consumers.

Over half of global consumers now mostly follow ‘everyday influencers’ and four in five want stricter rules on influencers to disclose photoshop or filters.

Subject matter experts – from beauty gurus, to fashionistas, chefs, DIYERs, and stay-at-home mums – are viewed as the most trusted to share authentic and genuine content. They are often targeted by brands to recommend, sell, or post sponsored content for products relevant to their subject matter.

Almost three quarters of consumers do not care about the number of social media followers they have, it is all about the content.

The power of an influencer lies in the trust and authenticity established between them and their audience, making transparency fundamental. Countries around the world have implemented various regulations to enforce that transparency. But despite the best efforts of regulatory bodies, two in five consumers feel these rules have made no difference to how much they trust influencers, and almost half (42%) don’t think influencers have become more authentic in the last five years.

In fact, 80% of consumers globally – rising to 85% in the UK – still want to see stricter rules for influencers to disclose editing or filters they used on published content.

Recent laws passed in Norway are requiring influencers to declare if their post contains edited or altered content. A third of UK consumers (32%) want to see influencers who don’t comply with advertising laws banned from social platforms permanently. One in five want to see influencers banned from monetising their social media presence going forward, for example taking away their revenue streams if they break advertising rules.

Authenticity is a headache for brands

Regulations from the Advertising Standards Authority in the UK have made it compulsory for influencers to declare ‘#ad’ when a post has been paid, in an effort to instil greater trust. Unsurprisingly, it is posts by influencers that are not sponsored, and which promote general consumer content, such as recommendations, reviews, and photos and videos, which consumers trust the most. Just 16% of UK consumers trust sponsored posts on social media.

Over a third of respondents said they are more likely to take product recommendations from the everyday influencer, with 44% keen to see those consumers receiving PR packages from brands.

This desire for genuine and unbiased reviews means that a large proportion (86%) of consumers seek out authentic user-generated content (UGC) before deciding to buy a product they’ve tried before. Two-thirds (68%) turn to UGC content for new tips and ideas for products they’ve used before.

“Consumers are now looking to the everyday influencer for genuine content they can trust, and actively seeking out user-generated content to validate their purchasing decisions,” Ed Hill, SVP EMEA at Bazaarvoice explains. ”In turn, by integrating UGC into all touchpoints, brands can use unofficial ambassadors that have genuine connections with their followers and audiences.”

“That isn’t to say sponsored content has no place in the marketing landscape, but brands should be considered and targeted in their approach. We have moved into an era beyond traditional micro and macro influencers. The influencer’s expertise and quality and genuine nature of the content are priority factors for consumers, and should be key considerations for brand marketers when developing future campaigns.”