They’re dropping their prices in hopes of appealing to a wider audience, in order to take their ethical messaging further, to truly make a difference. Dropping their prices by a huge 50p will hopefully ensure that the brand becomes a household name for more and more people and families. 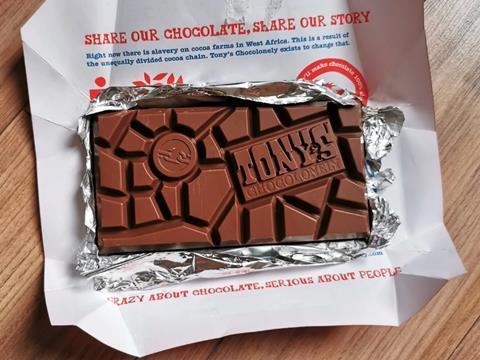 The ethical chocolatier, and Food and Drink Heroes judge, Tony’s Chocolonely announces a big product price drop in a bid to widen their appeal and gain traction on their campaign to end slavery in the confectionary supply chain.

They’re dropping their prices in hopes of appealing to a wider audience, in order to take their ethical messaging further, to truly make a difference. Dropping their prices by a huge 50p will hopefully ensure that the brand becomes a household name for more and more people and families.

The brand’s UK boss Ben Greensmith told The Grocer that the move represented an “investment” into consumers that would “close the gap” between Tony’s and the biggest confectionery brands – despite facing the same cost pressures as those other suppliers.

He said the business wanted to “use this as a chance to get more bars into people’s hands and drive awareness and show people there is an alternative, delicious-tasting chocolate that doesn’t involve exploitation”.

As inflation is set to reach the heights of 15%, most businesses are preparing to increase their prices to stay afloat, but Tony’s Chocolonely is taking a different standpoint.

Retail prices were ultimately set by the retailers themselves but they hope the move will mean shelf prices fall from £3.50 to £2.99 for the 180g bars, which represents 80%-90% of the brand’s business in the UK.

Greensmith says the reduction will lower the price differential between Tony’s and similar-sized competitor bars from about 155% to 66%.

“I firmly believe, giving shoppers the opportunity to buy a bar at a premium for a much better product with no palm oil, no plastic and higher cocoa content – plus we’re paying a bloody fair price for our cocoa – we can bring a lot more people in. And ultimately the more chocolate we sell, the more cocoa is going to be fairly traded.”

The move will also challenge the idea that consumers should bear the brunt of inflation in the supply chain.

“Profit is a means to achieving a goal. There is more than enough value and money in the value chain of chocolate, it’s just going to the wrong place,” he said. “If you look at the operating margins and profit the big chocolate companies are making, these are some of the richest companies in the world.

“It is a choice. If we can continue to do what we’re doing and show it is possible, it does send a message and put other companies under pressure to do the same.”