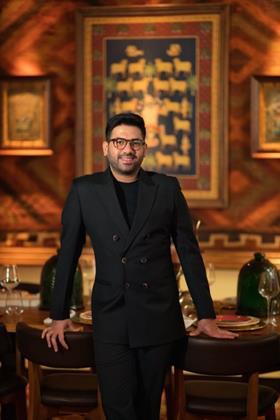 Roop Partap Choudhary is an award-winning entrepreneur, hotelier and restaurateur with 10 years experience in the Hospitality Industry.

His most recent success story is London’s luxury Indian dining concept, Colonel Saab, in Holborn’s Grade II listed, former town hall. Since its launch six months ago, it has been named one of the top Indian restaurants by Forbes, won Best Restaurant in Feed the Lion awards and welcomed regulars including Nobel Peace Prize winner, Malala Yousafzai.

He spent a year travelling India by car, train and bus with Indian food royalty Karen Anand, retracing places his father Colonel Saab was stationed in the army and curating contemporary twists on dishes passed down through generations of people they met, as a love letter to India and his family. He also brought back museum-worthy art and artefacts from his art collection, under challenging conditions, to ensure the restaurant takes guests on a visual and culinary journey across India.

His journey has been recognised in the under 30 Awards by Travel India Awards, as one of the youngest hoteliers to receive the accolade.

He is also the Executive Director of the Jewel Group of hotels, including award-winning palace hotel, Noor Mahal in Karnal, Northern India.