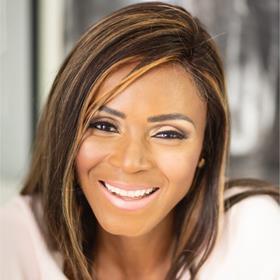 Chika Russell is the creator of the Chika’s brand and founder of Chika’s Foods – bringing West African flavours and culture to the UK. She’s an entrepreneur, a mentor, a business person, and a presenter.

Following a decade working in banking and in finance and qualifying as a accountant, Chika launched her own range of African-inspired, boldly-flavoured snacks satisfying a new mainstream demand for African foods. Her products appealed immediately to customers of Waitrose, Wholefoods, Holland & Barrett, and Ocado, and established Chika’s as the leader in this space. She has now grown her business to the point where there are more than a thousand stockists in the UK and internationally.

Chika was invited in 2015 to take part in Dragons Den and she gave what Deborah Meaden described as one of the very best pitches that she had ever seen. The battle between the Dragons for a stake in the business became the most watched episode of the whole series.

In 2021 Chika closed a series A investment to expand her snack business into the African continent. Launched in 2022, CHIKA’S Africa manufactures 2.6m units per week, employing over 300 people, over 50% women. CHIKA’S Africa has the goal of being West Africa’s largest snack manufacturer and distributor.

Making high quality snacks affordably and available to all and with the bold and ambitious aim to support thousands of African children through their education. Chika is passionate about female education and she is a partner to World Vision’s Empowering Girls programme. In 2019 Chika was selected as one of the Top 30 Inspiring UK Entrepreneurs by Business Leader, and she has been recognised recently as Consumer Business Rising Star at the Black British Business Awards. She was recognised by She Leads Africa for her contribution as a new leading female African entrepreneur.