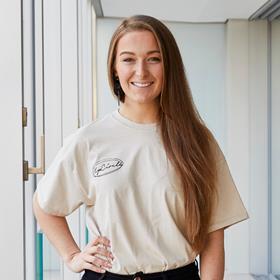 Anna was 22 when she launched UpCircle, the brand that’s grown to become the UK’s no#1 upcycled beauty brand - in just six years! In 2020 Anna and her team launched the UpCircle range into 2000+ retail doors across the UK and USA, tripled the size of their team and launched seven new products, all in the height of a global pandemic. UpCircle has bold ambition for the years to come and Anna was recently named as one of Forbes 30 Under 30 honourees.

When they discovered that more than 500,000 tonnes of coffee grounds that are consumed each year in the UK alone are sent to landfill, Anna and her brother Will decided to start collecting coffee from cafes across London and transforming them into skincare products. Since launching UpCircle has saved over 400 tonnes of coffee. The brand also rescues and reuses ingredients from the argan, tea, juice, date, olive and wood industries. UpCircle has seen staggering growth in the last six years, selling hundreds of thousands of products per year worldwide.